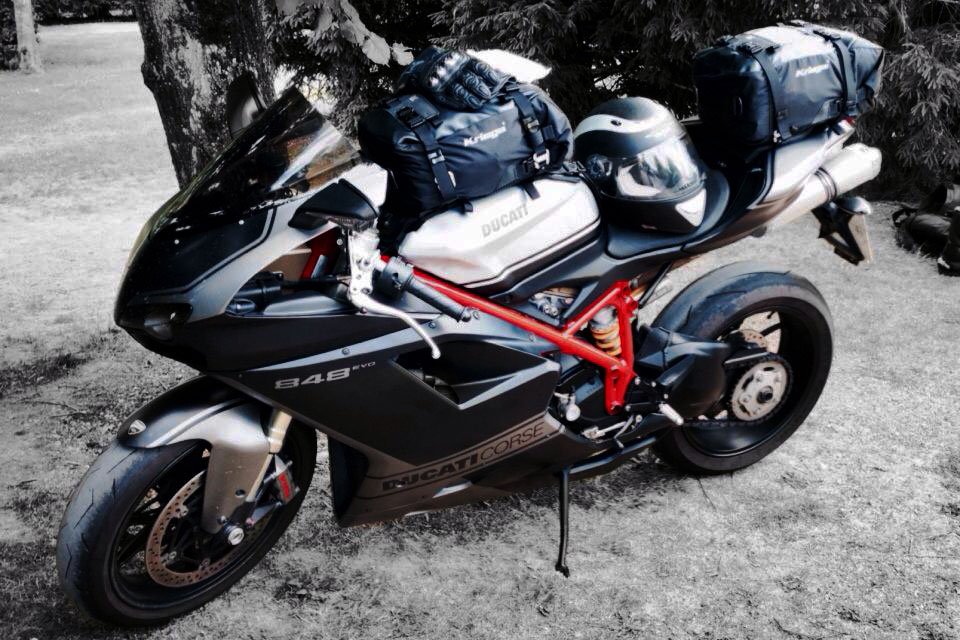 It was back in 2014. After years of flying backwards and forwards to Nuremberg in Germany and watching that little plane on the lcd display move across the map. I wondered to myself on numerous occasions ‘what does that distance feel like on the ground’. With a few days holiday to take and a week after my next German visit blocked out, I’d decided to start buying the smallest camping gear of everything I could find and find a way to strap it all the my Ducati.

It was a great research buying experience and one that started with packing. I chose the Kreiger system which is amazing! Waterproof, expandable and packs down, with multiple options for strapping. One bag on the tank, a rucksack and a back on the pinion seat. The tricky part was that I needed my work clothes for a week the other side.

I shopped online and went to my local Blacks store. I needed a summer bag as it was hot and only going to get hotter. Weather could change and I’d be staying at campsites so I needed a tent, but it had to be the smallest one I could find. I had a roll mat from a festival the previous year. It wasn’t the smallest but it was self inflating and I didn’t know the market at the time. I went for the Berghaus Peak 3.1 (A Blacks own brand at the time) A great little single pole tent that packs down really small. For a Sleeping bag I chose the Blacks Aerolite 1000 (now Intrepid 1000 Sleeping Bag) simply because its pack size was 31cm x 18.5cm. It was ample and most nights unnecessary.

I made a loose plan of direction, across France, through Belgium and then down through Germany (getting a chance to have a ride on some speed limitless roads) I did a few Google searches for campsites along the way avoiding the péage so I could see the countries on route. And here’s where it happened. I set off to the ferry terminal at Portsmouth, just 20 minutes from my house and upon arrival realised with all the set up I’d forgotten my Passport. Not one to be put off, I negotiated a trip on the next ferry (which was going into Caen not Le Havre) and raced back home. The problem was, I would now have an extra hour and a half, even to get to the original start point and I would be getting in late evening. I pushed on in hope that there would be some kind hearted campsite owner that would take pity on me and let me pitch for the night but no such luck. Tired and a bit over it I pressed on in my general direction but as my concentration began to fail I thought it unsafe to continue.

Struggling to keep my eyes open I headed away from rural areas on the map and pulled off on what looked like the beginnings of a country road. I made my way far enough that I was out of site of the junction and pulled over, propped my bike on its stand and found large tree by the road. With just my roll mat for comfort I sat against the tree and with minutes, past out. …I woke up in the middle of the night faced with some dimmed eery headlights some 200 metres up the road. I was drowsy so no idea of timings but then an ambulance rocked up 😂 I sprang to my feet, no idea if what I was doing was even allowed but with a mix of my bad French and their better English I made the situation understood and they agreed I should get some more rest before setting off. It was the Rio World Cup and we joked for a while as England had been knocked out that day and they left me to it. First lesson of Wild Camping learnt! Camp away from Towns and Villages and be inconspicuous.

The remainder of the trip to Nuremberg was plain sailing, with one stop in France and one in Germany. The French Municipal Campsites were amazing! Super cheap and great facilities. Even French lay-by stops seemed to have full camping facilities. The Germany campsite was more like sheep crammed into a field and 3 times the price but great to catch the next game in the World Cup.

The Story continues where my brother got wind of what I was up to and sped down through France to meet after the work week in Switzerland. We travelled through the mountains, down through Italy, along the South Coast of France and back directly north to catch the ferry. Comment Below if you want to hear more…

Get all latest content delivered to your email a few times a month.